Review: Nine: Curse of the Kalingans by Shobha Nihalani

Historical Fiction has caught the eye of many authors off late. History mixed with present day life and some interesting and thrilling events have become the new flavor in the current scenario. Ashwin Sanghi and his books are the biggest proof of it. Author Shobha Nihalani in her second offering has chosen one such theme to make some headway in the reader's mind. So has justice been meted out to the book or it's just a fantasy tale? Let's check it out.

Nine: Curse Of The Kalingan (Book - 1) is a modern tale which has been brought out by the author from the depths of ancient history. The Kalinga war, fought by Emperor Ashoka, took place in 261 B.C. The war brought enormous destruction, death, and devastation. This was the war which brought about a profound change in the most famous Mauryan Emperor. The war shattered the Emperor, who then converted to Buddhism and pledged never to wage a war again.
The society of the ‘Nine’, founded by Ashoka, protected their knowledge and power fiercely, and kept this wealth of wisdom a closely guarded secret. This secret could prove to be very dangerous for mankind if it were to be placed in the wrong hands. In order to ensure peace, these secrets were handed down the generations. It is believed that these secrets still exist, and their keepers and protectors live normal lives as preachers, teachers, and scientists.
Unfortunately, Ashoka’s desire to keep the peace of the land is about to be shattered. The war of Kalinga also gave rise to an angry spirit, the spirit of one killed brutally in the war. This spirit is bent on avenging the Kalinga Empire. His intention is to rule the world and to change its destiny, and for this he needs the hidden knowledge, the power of the Nine.
The story then unfolds in the present with the spirit possessing a young man, Jeremy, in order to complete this task. This possessed man then sets out to kill each of the Nine. Three of the nine are dead, and the rest of the members disappear. Only three people can now stop this dangerous spirit, Tara, the chosen Trinity nurse, Akash, a DJ, and Zubin, a forensic expert. These are the three who are chosen to protect and carry forward the secrets of the Nine.
As they reside in different parts of the world, they decide to travel to Tibet. There, they meet a Dutch woman, Lise, who knows the secret locations of the nine ancient texts that have to be brought to the hidden kingdom in Tibet. In Tibet, a monk enlightens them about their powers and how they can use them to defeat the Kalingan spirit. Then unfolds their dangerous and thrilling journey, their fight against this deadly spirit to protect the secrets of the Nine and to save the world from destruction. 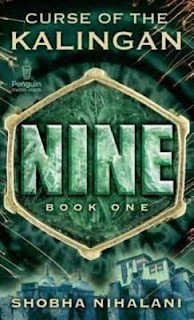 First look at the cover and it gives glimpses of something grueling and edgy in terms of the story. The title has been embossed on the page like an ancient carving which is a plus point for a historical fiction. The blurb tells a historical tale and there on it's effects on the modern day world. It's a lengthy blurb but enough to provide insights about the book. All the aspects be it title, blurb and cover have been taken care of very well considering the genre of the book.

The story starts off from the past with glimpses of the great Kalingan-Mauryan war. A Kalingan spirit before dying chooses revenge in modern day to restore glory to the Kalingan clan. Then the story moves in to the present day where Nine a secret society found by Ashoka thousands of years ago to keep the wealth of wisdom as a secret has been compromised by the returning Kalingan spirit in a human form. Three members have been compromised out of Nine and three young people DJ Akash, Tara & Zubin have been chosen to inherit the knowledge and save the world from a catastrophe. The story spilling over three continents and with lot of mystic elements and powers rallying behind it is about whether they are successful in deflecting off the threat or they succumb to the rising power of the evil spirit.

It's a fast paced historical fiction thriller. It has glimpses of the past, it has magic, it has secrets, it has naive young men and women and it has an evil which makes the plot a lot more interesting. The pace is furious at times and many a things will happen in the blink of an eye. The shift from the past to the present has been handled well by the author. The story doesn't goes off track anywhere during it's entire course of narration. The blend of history, present & fiction has made the plot a formidable offering for the readers.

There are no faults in the book.Editing is at the best in the book.  Some scientific explanations and spiritual lessons might put off a few while reading the book. But it all makes sense in the story.

It's a story with brute force and thrilling narration which makes the readers heads turn. It will make you jump out of your seat, it'll make you anxious and with all the thrills and high octane drama spilling over three continents it'll give you a satisfaction of going through the entire experience. As the book suggests a part two is on offering too for unquenched thirst of the readers.